This Thursday: Kristy Woodson Harvey Signing on May 2nd 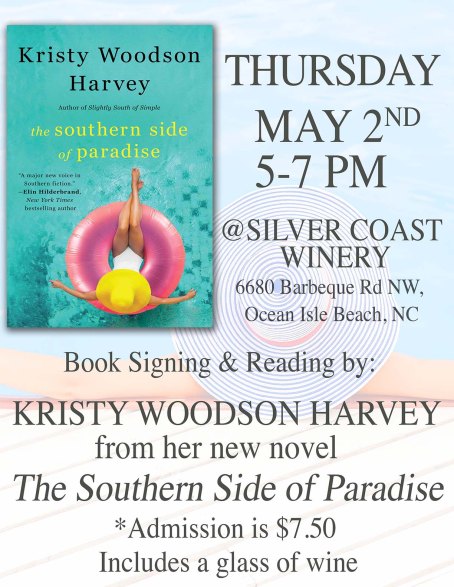 Kristy Woodson Harvey will be joining us Thursday, May 2nd from 5 pm to 7 pm at Silver Coast Winery, and she will read and sign copies of her newest book The Southern Side of Paradise

About The Southern Side of Paradise:

With the man of her dreams back in her life and all three of her daughters happy, Ansley Murphy should be content. But she can’t help but feel like it’s all a little too good to be true.

Meanwhile, youngest daughter and actress Emerson, who is recently engaged and has just landed the role of a lifetime, seemingly has the world by the tail. Only, something she can’t quite put her finger on is worrying her–and it has nothing to do with her recent health scare.

When two new women arrive in Peachtree Bluff–one who has the potential to wreck Ansley’s happiness and one who could tear Emerson’s world apart–everything is put in perspective. And after secrets that were never meant to be told come to light, the powerful bond between the Murphy sisters and their mother comes crumbling down, testing their devotion to each other and forcing them to evaluate the meaning of family.

Kristy Woodson Harvey is a born-and-bred North Carolina girl who loves all four seasons–especially fall in Chapel Hill, where she attended college, and summer in Beaufort, where she and her family spend every free moment. The author of The Southern Side of Paradise, The Secret of Southern Charm, Slightly South of Simple, Dear Carolina, and Lies and Other Acts of Love, Kristy is also the founder of the popular interior design blog Design Chic.

Comments Off on This Thursday: Kristy Woodson Harvey Signing on May 2nd